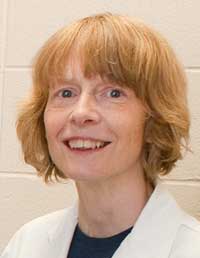 Joan is a Research Scientist and part-time Instructor in the Biotechnology Program at BCIT, where students earn a joint BCIT-UBC Bachelor Honours Degree in Biotechnology. She has taught core courses in molecular genetics, introduction to biotechnology and currently teaches protein biochemistry and advanced animal cell biology. Joan has almost 20 years of post-doctoral work experience and has conducted research in both the academic and biotechnology sectors. She has consequently developed a diverse background in several areas of molecular and cell biology, with a particular interest in the molecular biology of stem cells.

Prior to joining at BCIT, Joan worked for over five years at Chromos Molecular Systems as a Sr. Scientist and Team Leader for their Cell Line Engineering program. She led all projects focused on enhancing gene targeting and expression, and was successful in engineering Chromos’ proprietary (US Patents 20050181506 & 0120064578) ACE System vectors (Perkins et.al.). Joan was also responsible for engineering a manufacturing (CHO) cell line for a first-in-class therapeutic monoclonal antibody, which is now undergoing clinical development by Glenmark and Sanofi Pharma for the treatment of multiple sclerosis and Crohn’s disease, respectively (Bloomberg; Nature Biotech).

Joan’s Ph.D thesis focused on the biochemical purification and characterization of a novel & selective growth regulator of hematopoietic progenitor cells (Shellard et.al.; Logan, Shellard et.al.). This regulator belongs to a class of neutrophilic granule proteins that mediate a variety of pro-inflammatory activities and Joan is credited as the first researcher to identify its regulatory role in hematopoiesis and the pathogenesis of myeloid leukemias (Ouriaghli et.al.; Tavor et.al.). Joan’s post-doctoral work expanded her expertise in the molecular mechanisms governing embryonic and stem cell development. In the Zoology department at UBC, she analyzed the Polycomb gene, Asx, in fruit fly development (Sinclair et.al.) and at the Institut Pasteur (Paris, France), she studied the role of Leukemia Inhibitory Factor (LIF) in maintaining the totipotency of mouse embryonic stem cells (Shellard et.al.). 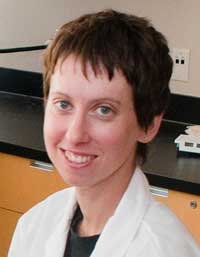 Sarah obtained her B.Sc. (1997) and her Ph.D. (2004) from the University of British Columbia Department of Microbiology and Immunology.

From 2004 to 2007 Sarah did post-doctoral training at the University of British Columbia with Dr. Calvin Roskelley in the Department of Cellular and Physiological Sciences, extending her work with the Rap1 GTPase to investigate its role in tumour biology. She looked at Rap1 in the regulation of cancer cell adhesion, motility and invasion using in vitro cell-line models and also investigated its role in the metastasis of cancer cells to the lung using in vivo models ( Freeman et al, 2010). In 2008, Sarah accepted a one year research associate position in the lab of Dr. Michel Roberge in the Department of Biochemistry, where she worked on the development of high throughput microscopy-based screens for inhibitors of cancer cell motility.

In 2009, Sarah joined the BCIT Department of Biotechnology. She currently teaches the Microbiology 3 course (focus on Immunology and Virology) to the joint BCIT-UBC B.Sc. Honours in Biotechnology students, and has also taught the Cell Biology, Virology and Immunology components of the Associate Certificate in Biotechnology.

In spring 2010, together with Paula Brown, Director of the Integrated Biosciences Research Cluster (IBRC), Sarah co-mentored high school students on a science fair project investigating the anti-proliferative effects of Dandelion extracts on melanoma cells. She is also active as a mentor in the Student Biotechnology Network.

In recent years, Sarah’s major area of research is identifying the role of inflammation in the development and progression of chronic human diseases, such as cancer, type 2 diabetes, and cardiovascular disease. Cell-based assays are being developed for the testing of compounds and natural health products (NHPs) for their anti-inflammatory potential.

Sarah was also a co-investigator with her colleague, Joan Shellard, on an NSERC Engage funded project that assisted iProgen Biotechnologies, a local, early-stage company in the development of their novel protein therapeutics.

With a grant awarded from the BCIT Institute Research Funds, Sarah is investigating the role of inflammation-promoting immune cells known as tumour-associated macrophages in breast cancer progression. Specifically, she is investigating the role of the secreted chitinase-like proteins, YKL-40 and YKL-39, in the interactions that occur between tumour-associated macrophages and breast cancer cells. These interactions appear to drive breast tumour progression, and finding ways to disrupt them may provide novel approaches to breast cancer treatment.

Rob first worked in a research lab as a summer student for Dr. Robert C. Miller on a project studying cloned bacterial Cellulase enzymes. Bob Miller’s booming enthusiasm for science is infectious and Rob caught the bug for applied Microbiology/Biotechnology and hasn’t looked back since. After completing an MSc in Network Immunology (J Immunology, 1990) with Dr. Geoffrey W. Hoffmann, he worked as a lab technician and graduate student on a series of medical and non-medically related projects all with a practical focus. Rob graduated from UBC with a Ph.D. in Animal Science with Dr. George K. Iwama studying Stress Proteins and Bacterial Kidney Disease in Fish (J Aquatic Animal Health, 1997). He has been teaching in the Biotechnology program at BCIT since the fall of 2000 and has also served as a member of BCIT’s Sustainability in Education committee. Rob’s interest in sustainability extends to his current research focus on cryodiesel and other low carbon emission biofuels.  His other research interests include proteomic analysis and modification of immune system receptor repertoires. Rob serves as a scientific advisor for Network Immunology, a local biotechnology company that is researching novel approaches to vaccine development.