Calling all BCIT staff and faculty! Now is the time to serve your Institute—and your planet.

For years, turning off the lights was considered optional. Lights were left on in offices, classrooms, shops, labs, bathrooms, and hallways. Lights burned long into the night—even when no one was there to need them.

But with BCIT spending approximately $600,000 annually on lighting alone, the time has come to put an end to unnecessary light use. It's wasteful. It's expensive. And it contributes to climate change. Learn more >

Strike back! Become a Light Saver, and join the alliance to stop energy waste on BCIT's campuses.

Read this site, take a short quiz, and before you can say, "Skywalker," you'll be saving light with the best of them, and helping BCIT reach its goal of reducing energy consumption by 8%.

Thank you to all who joined the Light Savers Alliance.

Trades contest winner: NE12. The Light Savers alliance conducted random after-hours checks of the Burnaby campus trades buildings (NE2, 4, 6 and 8; NW3 and 6; and NE10, 12, 18 and 20) as part of a special Light Savers Trades contest during the month of February 2011. These buildings offer the greatest opportunity to reduce electrical costs. Remarkably, just two of the 10 buildings were found to have lights left on overnight. Since there was a tie for first place, a draw was held to determine the winner.

NOTE: This reduction is a result of many initiatives across BCIT to reduce energy use, but we hope this campaign helped raise awareness! Thank you for participating. 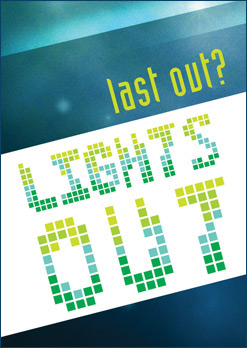 We’re counting on you, too.

Turn off the lights when you’re the last to leave the classroom, lab, auditorium, or washroom.

And remind your teachers: last out, lights out!