Cole Macdonald Is Pretty Pleased with How His Career is Unfolding

Cole has seen more of our province than most. Before coming to BCIT to take the Industrial Instrumentation and Controls Technician program, he had already spent a few years working in BC's Central Interior as a forestry technician. 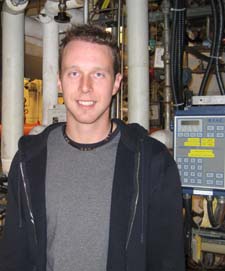 So after graduation, when he was offered an apprenticeship with Epscan Industries Ltd. in Fort St. John, Cole saw an opportunity to learn his trade and earn some good money, and a chance to see the North. Epscan designs, installs and maintains the electrical and instrumentation component of industrial facilities. Many of their clients are oil and gas companies, but they also do work for mining, pulp and wood industries.

On a typical day, Cole could be “performing regular maintenance such as calibrating flow measurement and gas detection instruments,” or he might be involved in the construction of a gas well site or processing plant. He is particularly proud to have been part of the instrumentation and electrical team that built Steeprock, Encana’s new $60-million gas processing facility, located just south of Dawson Creek.

Cole chose the instrumentation program because he felt it fit with things he knew he enjoyed - “working on racecars, computers, and figuring out how stuff works” - and knew that jobs in the field paid well. When he came to BCIT, he was especially impressed by the instructors. “The instructors all have real-world experience,” says Cole. He also appreciates how hard his instructors worked to put their studies in context. “Our instrumentation instructor organized two separate field trips to tour the pulp mill, which is now shut down, in Squamish.” With just over a year of work and study left before he completes his apprenticeship, Cole is pretty pleased with how his career is unfolding. “I have a great job and I’m making good money.”