The Highlight of The Program Was the Three Week Practicum!

There is no typical day on the job for Jason Di Stefano, a 2002 graduate of BCIT’s Wireless Communications Technician program. “One day I could be repairing broken equipment in the shop and the next day I could be flying in a helicopter to reach one of our remote communications sites.” Jason works as an Electronics Technician for the Department of Fisheries and Oceans (DFO) and is responsible for the installation, maintenance and repair of DFO communication systems in BC and the Yukon. He travels quite a bit as critical communications equipment can be located on mountain tops, on coast guard ships or fishing vessels, in the vehicles of fisheries officers and in DFO and Coast Guard offices throughout the province. 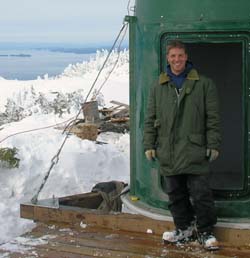 Jason is part of a team of fifteen electronics technicians, technologists and engineers responsible for keeping the communications systems operating for the DFO and the Coast Guard. There is a lot to learn and many experienced people to learn from.

Jason came to BCIT directly from high school. He wanted a hands-on, technical job and knew that BCIT had a good reputation for technical training, so he decided to enrol in BCIT’s Electronics Technician Common Core program, which could lead to a number of possible study options. When he chose the Wireless Communications option in his second year, he wasn’t sure where it would lead him, but he knew it would expose him to the latest technology. He found the team-based learning environment and hands-on projects prepared him for real life as a technician. Although the workload was “pretty heavy”, his instructors were always on hand to help when the going got rough.

“The highlight of the program was the three week work practicum” he spent with the DFO. He learned from experienced technicians, and got a chance to demonstrate his skills. They must have liked what they saw – they hired him as soon as he graduated.

Jason is not finished with school just yet. He is taking part-time studies at BCIT so he can continue to learn about new technologies in his chosen field. He figures it probably won’t hurt his career either.

Jason’s advice for students considering the Wireless Communications Technician program? “Be open to new opportunities, because you never know where they might lead you.”