Second Career in An Unlimited Field

Power Engineering is a second career for Greg Cameron, who is Manager of Utility Distribution Services for Central Heat Distribution Ltd. in downtown Vancouver. He was a journeyman carpenter for a number of years and was looking for a new career that was also hands-on but more stable, with opportunities for advancement. Power engineering fit the bill. 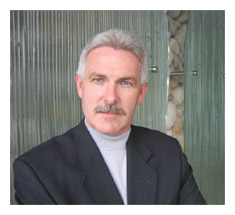 Greg credits his education at BCIT for fast-tracking his new career. "I honestly would not have obtained the jobs I've had without it," he says. "The instructors are knowledgeable, the program pushes you, and the credential opens doors." The reaction of employers has been "Wow, that's terrific, you went to BCIT."

The company that Greg works for generates and distributes steam heat to 200 buildings in downtown Vancouver. It's a concept that has been popular for many years in Europe and the United States, and now increasingly in Dubai, China, and other countries on the economic rise. It's been slower to catch on in Canada, but it's a system that makes a lot of sense — rather than have a boiler in every building, and all the regulatory and maintenance issues to deal with, one central body handles it all.

Greg is manager of the entire distribution system — the design, installation, and maintenance, as well as customer service. "I enjoy the job because it's all-encompassing; I never know what's coming down. I find it challenging and rewarding."

His career has advanced steadily since he graduated in 1995. His first job was with Elk Falls Pulp and Paper Mill, where he stayed for five years. Then he moved on to Riverside Forest Co-generation Plant in Armstrong, B.C., expanding his experience and knowledge. He wanted to make a move into a management position, which led him to his current job, which requires the right blend of management and technical know-how to suit him.

Obviously enthusiastic about his career, Greg says that the field has many new challenges for prospective engineers to take on. He gives for an example the environmental impact and rising costs of fossil fuels. Most of the steam that his company generates uses natural gas as fuel, but they're looking to new solutions for the future, such as bio-fuels and others.

"This field is unlimited," says Greg. There is no question in his mind that going to BCIT made all the difference to his future. In fact, he still keeps in regular touch with the instructors here, and has been on the school advisory committee for a couple of years — a strong testament to his belief in the power engineering program.