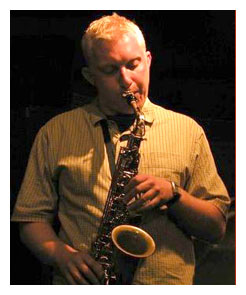 Cory Weeds would like to be known as the guy who saved the Vancouver Jazz Scene, and he is well on his way by launching The Cellar on West Broadway in Kitsilano.

The Cellar is a Jazz Supper Club serving cuisine with a Creole and Cajun influence and features the finest Vancouver-based, Canadian and International Jazz Artists.

Cory observed that there was a lack of accessible venues in which to listen to Jazz, and through his experience as a jazz musician, promoter and fan, the Cellar was created.

The Venture Program became an excellent venue for Cory to meet and network with a lot of different people. He explains, "I was able to bounce ideas off of people and get constructive and helpful criticisms, and equally helpful enthusiasm."

When Cory first took the Venture Program in 1998, he decided that the Jazz Club was not ready to be developed at that time because he needed more experience in other areas such as promotion. The Venture Program helped him realize this, and Cory first started a very small promotion company using his band as the subject and promoting some other shows in Vancouver. Then, he met his business partner who had restaurant experience. They found the venue for the Cellar and "the rest is history." The Cellar now has a full time bartender and chef and six other part time staff.

Cory enjoys having his instructors and classmates come and visit the club. He says, "It is really special to realize your dream, and have the people that helped you along the way come down and support you."

Future plans include a bigger venue, and a promotion company, record company and management company all grown out of the Cellar.