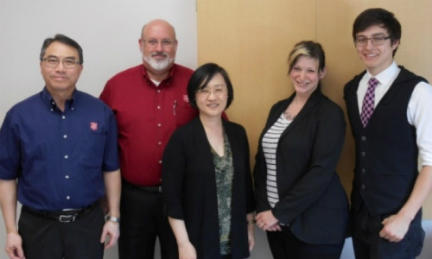 Courtney Garnett and Scott McDonald were a team of BCIT students who completed their final project practicum at the Salvation Army’s Vancouver Community & Family Services (VCFS) facility, a center that hosts counselling and skill-building services and programs to those in need living in Vancouver’s downtown east side.

The purpose of this project was to determine the feasibility of moving the facility to a larger purpose-built building. The team was to develop a Functional Assessment of the VCFS’s current operations and physical facility to be submitted to the Salvation Army’s District Headquarters (DHQ) as part of the proposal for a new building.

An investigation was conducted into the root cause of inefficiency at the VCFS in order to develop a Functional Assessment that would eliminate the constraints. Through interviews with the VCFS staff, observations and inspection, and measurements of the current storage and space usage, two major constraints were identified that significantly impacted the VCFS’s ability to operate efficiently:
A Functional Assessment was developed that eliminated the constraints of space and flow of movement, as well as allowed for program growth and expansion, and was presented at the VCFS’s meeting with DHQ. The Functional Analysis was well-received by DHQ as well as their headquarters in Toronto, and the facility is currently moving to the next stage of the proposal process.

A similar investigation was conducted for the Salvation Army’s Homestead ministry, providing a foundation of research that the ministry can utilize in developing a similar Functional Assessment to eliminate the constraints on their operations due to their building’s capacity.
PROJECT TESTIMONIAL

"Working alongside Scott and Courtney has indeed been a privilege. They were a fantastic team and worked very hard to provide the Functional Assessment we needed to support our proposal for a new purpose-built facility. We are very pleased to say that their work has proven most beneficial for our ability to continue this process through to the next stage of development. We at the VCFS as well as Homestead have thoroughly enjoyed working together with them and are extremely pleased with the outcome. I believe that the opportunity to apply the learnings of the Business Operations Management Program to the non-profit sector has been of mutual benefit. We look forward to additional opportunities to partner with this program.”