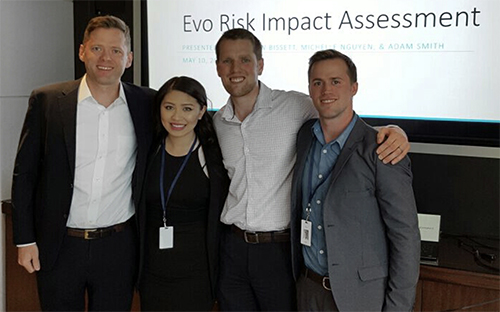 The purpose of the project was to assess the risk brought to Evo (car sharing) with the inevitable entrance of Uber (Ridesharing) into the Vancouver market. To assess the possible impact Uber may have on Evo, we looked at Uber operating in six other major cities. Ramifications to Car2Go, a major competitor of Evo, were examined as well.

The project also included a transportation survey that targeted three areas of Vancouver: Kitsilano, Mount Pleasant and Downtown Vancouver. The survey was completed by 331 participants, 257 of which were residents of the Municipality of Vancouver. The purpose of the survey was to explore Vancouverites’ perceptions of Evo and their views on carsharing (Evo/Car2Go) as well as ridesharing (Uber). The survey looked at the situational circumstances in which a Vancouverite would choose Evo over Uber or vice versa.

Following the survey, results were extracted and analyzed to compile information to assist in developing a recommendation. It was found that cost and convenience are the most important aspects when choosing a mode of transportation. From the survey results, there was almost a 50/50 split between Vancouverites who would rather use Evo over Uber due to convenience and cost. While many consumers were aware that Uber is a less expensive alternative to taxis, many did not realize that Evo is a much cheaper alternative to Uber. We reached the conclusion that ride sharing and car sharing can co-exist and even flourish in the market together. Based on this, Evo should continue to make themselves easily accessible to consumers and focus on differentiating themselves while educating Vancouverites about the cost savings between Evo and Uber.
PROJECT TESTIMONIAL

“I was very pleased with the adaptability of the student team by expanding your project and doing a survey to find the answers that were not available online. I was happy that you were able to support your recommendation off of your research and findings and not off our shareholder opinions.”