Seeing the Light. A Summer of Optical Design. 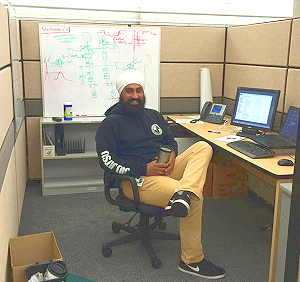 Sometimes life will steer you into a full circle, even if you are paying attention. In a past life, I was a chemistry graduate from UBC and worked as a research assistant in Cold Molecules and Laser spectroscopy research. A few years later and some odd jobs in between (including martial arts instructor, barista, delivery driver, and youth coordinator) I find myself finishing off my first year of Robotics and Mechatronics at BCIT. The impending doom of a summer working a bleak job for monetary gain creeps up faster and faster. But, as luck would have it, Professor James Booth at BCIT just so happened to be working in the field of Cold Atoms and Laser spectroscopy and just so happened to need a student who has some CAD and mechanical design skills as well as cold atom and laser spectroscopy knowledge. A couple of emails, some paper work, and a parking pass later I find myself back in the world of physics, atoms, and lasers.

My role in the Prometheus project was primarily to design and organize the laser optics for a laser light box and a 3D – MOT (magneto optical trap). I spent the majority of the summer designing and learning about optics, and putting together CAD models in SOLIDWORKS. The experience as a student employee working for Professor James Booth and alongside the MAKE+ applied research at BCIT was invaluable. I was given significant freedom to make my own design and iterations with timely constructive feedback and guidance. On the surface this appeared to be an exercise in becoming familiar with CAD modelling and design, some may even call it “adult lego”. But, hidden beneath this were lessons in communication (to email or not to email?), team collaboration, and life.

The support and willingness to teach displayed by Prof. James Booth was second to none and inspiring. He was extremely patient with not only seven different versions of a laser design (7.4 to be exact), but also with explaining the physics and fundamental principles behind the system. Schematic design for transferring laser light from a fiber optic cable (FO), splitting it into 3 separate beams and combining them into the center of a glass vacuum cell – the heart of the magneto-optical trap (MOT). The MOT is the device which enables us to build technology out of atoms. 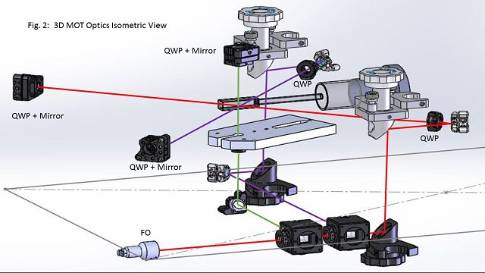 In this diagram QWP stands for quarter wave plate, an optical device for manipulating the polarization of the laser beam.


Prof. James Booth spent hours with me on a whiteboard explaining the physics and fundamental principles behind what we were doing and why we were doing it. He asked questions that forced me to think about my design and logic. He told me to never trust anyone, including himself, and to demand the evidence for the claims to be made, a scientist to the bone.

The MAKE+ group was extremely supportive and kind, even with their outrageously busy schedule. The experienced members at MAKE+ gave me some simple and yet powerful ways to think about work and design. Specifically, Joe Newton taught me to demand the requirements when signing. It seemed like a simple and obvious idea, but I think that’s what makes is so powerful. The demand for requirements immediately improved the effectiveness of my time spent working over the summer. Ernie Janzen may have dropped a zen life lesson on me without even knowing it. I asked him a simple question of “How do I start designing? Top-down? Bottom-up?” It felt so overwhelmed of where to start on this project. I had all the individual pieces that were required and I knew Prof. Booth’s requirements were for the laser system, but where do I start? Ernie looked at me with a wink a smile on his face and said “both”. Again, simple, powerful, and effective was the advice of the MAKE+ applied research team.

I could have not asked for a better summer. I learned about physics, lasers, and atoms by having direct access to a physicist who willingly answered my questions. I applied the fundamental mechanical design skills I just learned from my first year of Robotics and Mechatronics at BCIT. Last but not least, I got the opportunity to do some meaningful work that fostered my newly learned skills as well some old ones.